Home > News > The Newcomers: Here are the 10 electric car brands coming to a forecourt near you soon 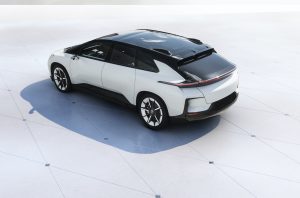 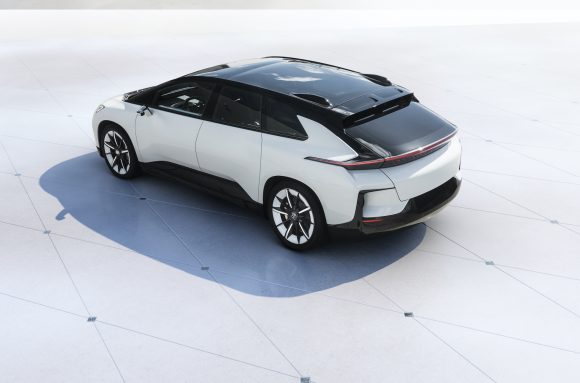 The car industry is brimming with brands with 100-year-old histories and DNA that stretches back for generations – but there’s a glut of newcomers arriving aiming to disrupt the well-established players.

Many of these new names come from China as the country supercharges not only its car industry but the world of electric cars, driving down the cost of batteries and materials needed for an electric future.

Meanwhile, others are revolutionising things much closer to home and have the backing of some of the biggest automotive brands.

As the UK heads towards its 2030 date for electrification, many new car brands will come and go but we think there are a handful that are really interesting right now.

Some are British companies while others have the UK in their sights as a hotspot for EV tech – either way, these are the top 10 brands we think you should be looking out for. 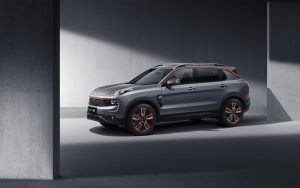 Of all the names on this list, Lynk & Co is probably the one that rings a bell the most. It’s owned by Geely and sits alongside Volvo, Polestar, Lotus and others in its group of brands.

The name suggests boutique style but don’t dismiss this as a trivial venture as the Chinese brand has already launched in Europe, with a UK arrival expected next year.

Sales will be via subscription and it’s likely Lynk & Co will be online-only with no physical dealerships, although don’t rule out Polestar-like pop-up experience venues in shopping centres. 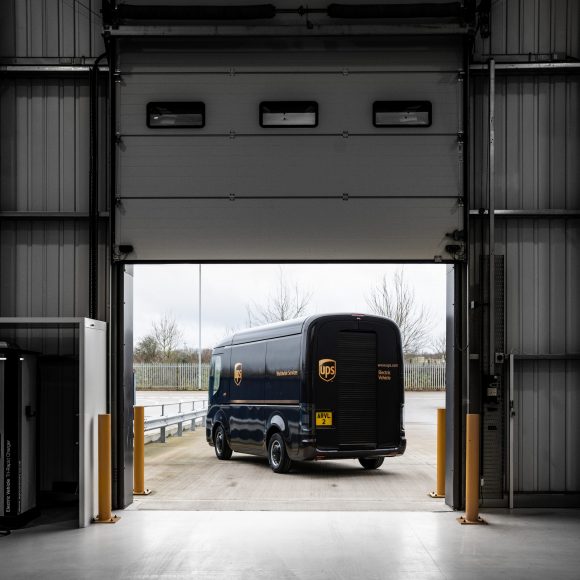 This UK company is set to make huge waves in the world of EVs, particularly buses and commercial vehicles.

Founded in 2015, and based in the UK and US, it takes a different approach from Tesla with its huge factories and instead chooses to move into existing buildings and builds small ‘assembly cells’.

Each cell has about four robots which build vehicles with aluminium parts, with structural adhesive and fasteners. It made headlines with Royal Mail trialing its electric van in 2018 and First Bus announcing last month it would trial Arrival’s bus. The van begins wider trials in the UK this year and goes into production in Q3 2022. UPS is considering them too. 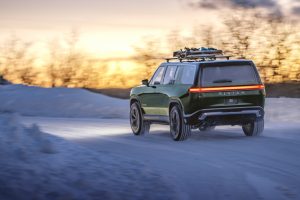 It was founded by 37-year-old Robert ‘R.J’ Scaringe who dreamt of starting his own car company when he was a teenager.

In mid-2018, Rivian turned up at the LA Auto Show and announced plans to build an all electric pickup called the R1T and an all-electric SUV called the R1S.

Since then Scaringe has raised $1.7bn from Amazon and $500m from Ford. Amazon has placed a $5bn order for 100,000 fully electric delivery vans as part of its ‘Climate Pledge’, while Ford will build a new Lincoln SUV in partnership with Rivian.

Rivian is readying its RT1 pick-up and R1S SUV for launch with US production starting this year. Rivian has said it intends to come to the UK in 2022 with right-hand drive cars. Expect an online sales model like Tesla. 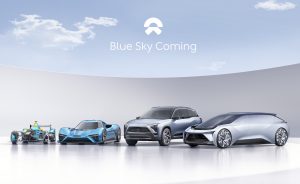 Another Chinese firm, Nio has made great waves in the electric vehicle world. It’s recently revealed the ET7 in its home market – a luxury electric saloon car, set for launch in 2022, with a range of more than 600 miles and a multitude of autonomous driving technologies.

It’s a serious rival to the Tesla Model S and the firm sold over 36,000 cars in China last year alone.

Nio was founded in 2014 by Williams Li, a Chinese tech entrepreneur, and since then the firm has launched a range of SUVs and crossovers, all of them electric and designed to appeal to the burgeoning Chinese premium market.

The ET7 is particularly interesting as it should cost around £51,000 when it launches next year, but that price can be lowered if owners choose to ‘subscribe’ to the batteries – battery lease, effectively.

The ET7 will also come with 19 driver assistance features but, again, owners can subscribe to more features should they wish to. Nio has plans to launch in the UK too in the near future, so expect an online purchasing service. 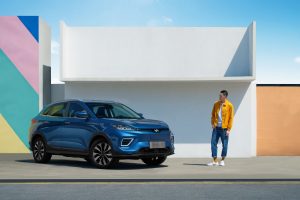 Don’t worry if you’ve never heard of WM Motor – or Weltmeister to give its proper name as it sits under the WM Motor umbrella company – as it’s brand that not many people outside of China know about.

It was founded in 2015 by Freeman Shen who’s a former board member at Geely during its acquisition of Volvo in 2010.

Weltmeister was the first Chinese EV startup to run its own manufacturing facility, builds home wall-box chargers and is one of the highest-funded electric vehicle startups in China.

While Tesla and Nio focus on the premium market, WM Motor is all about mass-market electric cars and has two models in its range – the EX5-Z (pictured) small crossover and the EX6 Plus, a mid-sized SUV; a third model called W6 will arrive this year.

There’s no word on whether the brand will be coming to the UK – if it does, it will have a tough job with the likes of Renault and MG currently dominating the mass-market electric sector. 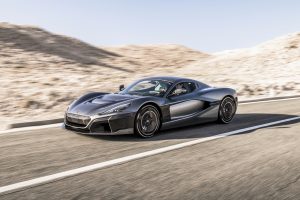 Porsche has just upped its stake in Croatian tech firm Rimac Automobili from 15.5 per cent to 24 per cent – that shows you how seriously Porsche is taking Rimac and its technology.

Its latest car is the C_Two, a 1,888bhp pure-electric GT hypercar limited limited to just 150 units, which will be going on sale in Europe in a couple of months time. Luxury car dealer H.R. Owen has the exclusive UK franchise.

The Rimac story is an interesting one. Founder Mate Rimac first dreamed of creating his own electric supercar in 2009, working in his garage in Croatia. 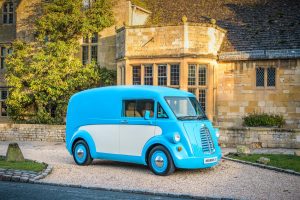 The JE is a modern interpretation of the classic Morris J-Type van loved by van operators and businesses in the 1950s and 60s. For the 2020s, the van has been revived under a new brand called Morris Commercial, backed by UK and European investors, and the JE is a pure-electric van.

For approximately £60,000, it has a range of around 200 miles (which is a lot for an electric van), has a 1,000kg payload and a 2.5-tonne gross weight, and is manufactured with UK-sourced components from a factory in Worcestershire.

The retro styling harks back to the J-Type with classic two-tone paint schemes available and there are plans for further derivatives like a pick-up. Pre-orders are already open and deliveries are expected this year. 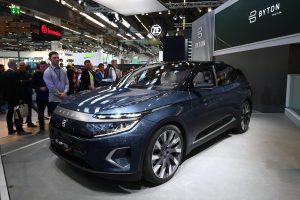 Another Chinese electric car brand but one you should have heard of. It was established in 2017 by former BMW and Nissan executives and has had a quick journey to the top by revealing a production-ready version of its M-Byte SUV at the Frankfurt Motor Show in 2019.

With a range of 289 miles and an amazing 48-inch curved OLED 4k screen that runs across the dashboard, it has the potential to really make an impact in the electric SUV sector. 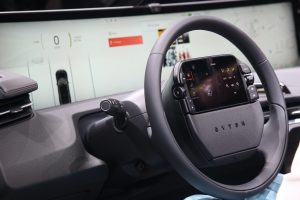 It revealed plans for sales in Europe last year, initially focussing on Switzerland, Germany, Norway, France, Netherlands and Sweden, and a number of dealer partners, one of whom is Hedin Automotive.

Byton says it will offer an ‘online-to-offline’ sales model with a mixture of physical and digital. UK, right-hand drive sales are expected late this year or early 2022. 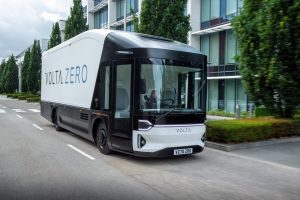 Volta Trucks was established in Sweden in 2019 by Carl-Magnus Norden and Kjell Waloen and has already built its first vehicle – a fully-electric, 16-tonne truck called the Volta, and it’s been developed in the UK.

It’s the world’s first purpose-built, fully-electric 16-tonne commercial vehicle, and has been designed for inner-city deliveries and aims to help reduce the environmental impact freight deliveries have in urban areas.

It uses an innovative e-axle for enhanced efficiency and range, the first European commercial vehicle operator to do so, giving a range of 95-125 miles and a limited top speed of 56mph.

Prodrive, along with Astheimer and Magtec, helped to build the vehicle, which went from the drawing board to finished product in just 10 months. The firm has a large order bank already, and UK road trials are currently underway.

Faraday Future is an EV startup that’s proof building an electric car company from scratch is no easy thing. It was first founded in 2014 by Jia Yueting in California and the name is a reference to scientist Michael Faraday.

It revealed its first vehicle, the 1,000bhp FF Zero1, in 2016 at the Consumer Electronics Show (CES) in Las Vegas, which showed what an electric racing car could look. It was a preview of how wacky Faraday Future’s road cars could look like.

Several difficulties arose as the brand readied its FF 91 model (pictured above) in 2017, including both its CFO and CTO leaving, bank loans sought and Jia Yueting stepping down as CEO in 2019 after filing for bankruptcy.

His place was taken by former Byton CEO Carsten Breitfield and since then, as of January 2021, the firm has announced an SPAC merger with Property Solutions Acquisition Corp, with estimated value of $3.4bn.

Once complete, production of the FF91 is expected to commence within 12 months. A UK launch in unlikely for quite some time. 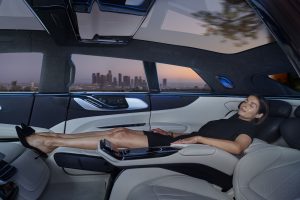 You can relax in style in a Faraday Future