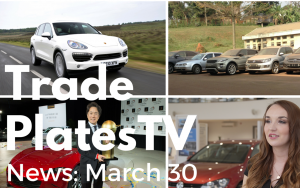 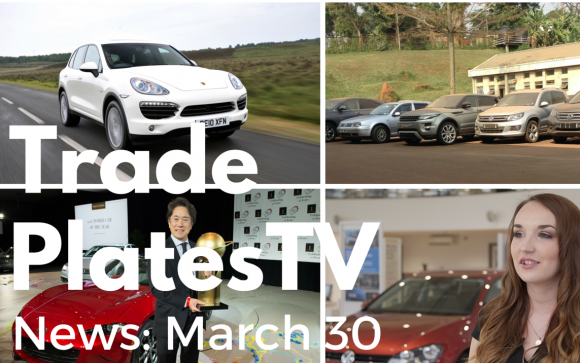 ON this week’s Trade Plates TV news update, we take a look at the top stories from the week. In the past seven days, the World Car of the Year was announced, it was leaked that Dyson is expanding into the world of electric motoring, while Volkswagen and Porsche announced a recall of 800,000 cars.

Mazda MX-5 named World Car Of The Year
It was the Mazda MX-5 which came out on top in this year’s WCOTY contest. It beat the Audi A4 Avant and Mercedes GLC to victory, in the awards judged by a group of international journalists and announced at the New York Motor Show.

Could Dyson be making an electric car?
It was revealed last week that Dyson is joining the electric car revolution. The National Infrastructure Delivery Plan revealed last Wednesday that, ‘the government is funding Dyson to develop a new battery electric vehicle at their headquarters’.

Recall announced for Cayenne and Touareg
Volkswagen and Porsche have announced they will be recalling 800,000 Cayennes and Touaregs, built between 2011 and 2016. This is due to a suspected problem with a pedal, after the group carried out internal checks that revealed a fastener in the system could become loose.

£1m of luxury cars returned to the UK
A first for the authorities investigating car key thefts has seen £1m-worth of luxury cars returned to the UK. Twenty-four cars, including expensive Range Rovers, Audi Q7s and BMW X5s, were discovered in East Africa last May after a stolen Lexus was traced across Europe, the Middle East and Africa, exposing an international car theft ring.

Another healthy month of manufacturing growth
Figures released last week have shown another great month of growth for UK automotive manufacturing. Production for the year-to-date is up 10.6 per cent over the same period last year, while output for the domestic market rose 24.4 per cent in the month, accompanied by a robust 9.1 per cent increase in export production.

Saleswoman hits record figure in six months
Casey Mackenzie from King’s Lynn Volkswagen decided to change her career in September last year from receptionist and service advisor to salesperson. In the three months since, she has far exceeded expectations by becoming the dealership’s top seller.

Motor Village UK adds Jeep to its line-up
Motor Village UK, based just off Oxford Street, will display Jeep vehicles in its showroom for the first time this spring. The showroom has previously only sold Fiat, Alfa Romeo and Abarth vehicles.

‘CD-Eggs’ winner announced
Our winner of the Car Dealer Magazine CDX chocolate egg has been announced! Nishad Panchal from Charterhouse Garage in Godalming was the 1,000th delegate to sign up and will be receiving a gorgeous Easter egg very soon!