THE UK’s used car market suffered for a second consecutive quarter but 2017 remains level overall, according to figures released today by the Society of Motor Manufacturers and Traders.

The industry body said a total of 2,102,078 second-hand cars changed hands in the third quarter – from July to September – representing a drop of 2.1 per cent year on year.

Year-to-date, the market remained at record levels after a bumper first quarter, though, with more than 6.3 million buyers opting for a used car in the first nine months of 2017 – a 0.1 per cent increase. 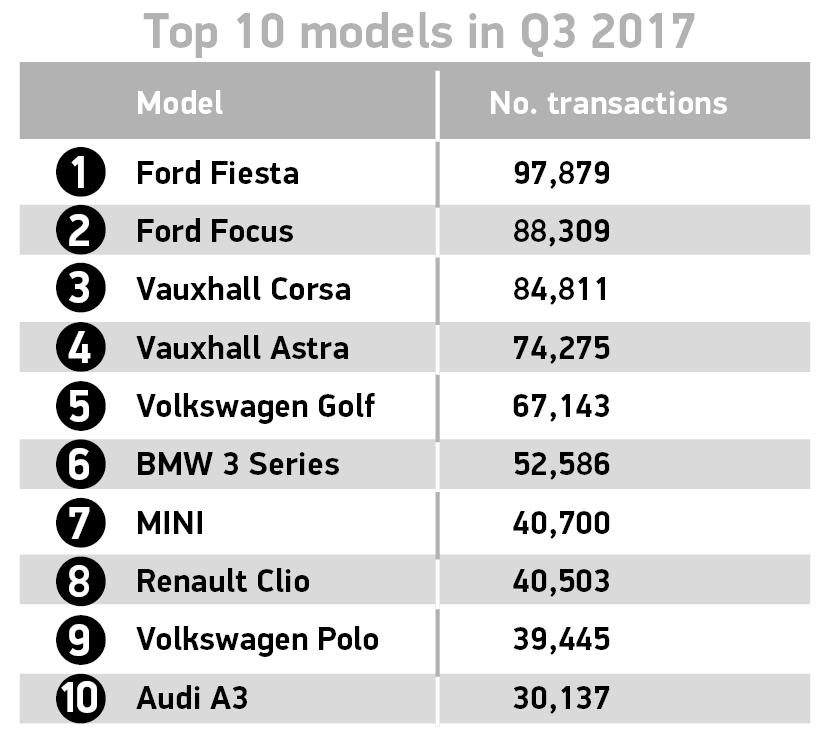 In the latest quarter, superminis extended their reign as the most popular vehicle segment, taking a third of the market (33.6 per cent). However, SUVs and minis were the only segments to show growth – up 11.2 per cent and 1.3 per cent respectively, reflecting new car market trends.

Meanwhile, silver continued to be Britain’s number one used car colour, closely followed by black, which – following new car buying patterns – saw its appeal grow by 0.8 per cent. Blue, grey and white made up the rest of the top five used car colours.

More motorists also took advantage of the wide range of alternatively fuelled hybrid and electric cars now entering the second hand market, with registrations rising by 17.0 per cent to 25,196 units in the third quarter. Pure electric vehicles in particular proved increasingly popular, with sales up by 66.4 per cent. And while petrol sales fell by 6.5 per cent, demand for diesels remained healthy, rising by 4.2 per cent. In the year to date, more than 2.5 million used diesel cars have changed hands.

SMMT chief executive Mike Hawes said: ‘The used car sector remains in good health as motorists take advantage of some great deals on cars – including some of the latest low-emission diesel and alternatively fuelled vehicles.

‘However, as demand in the new car market cools, used car sales normally follow suit unless there are significant tax changes affecting the new car market. Fleet renewal is the fastest way to improve air quality, however, so we need economic and political certainty to boost buyer confidence and keep both markets moving.’

‘However, what we see is a vast disparity in the performance of dealers with very few just reflecting the “market”. More to the point, there is a large number of dealers organically growing double-digit volumes at solid gross margins through a progressive mindset and processes that enforce this through every part of their business.

‘This mindset is characterised by providing a customer-centric buying experience, as well as being led by the best available data, to not only inform decisions on stocking the most desirable vehicles and pricing them to market, but also identifying where the car-buying audience is.

‘Dealers that do this well have been gaining share and those that don’t have been losing share, which is only likely to become more so if the market softens.’

Simon Benson, director of motoring services at used car website AA Cars, said: ‘Sales of used cars have suffered but not nearly at the same rate as the new car market, which experienced a double-digit decline last month.

‘While demand for new diesel vehicles dropped off by almost a third in October, the second-hand market saw a slight uplift in sales during the last quarter.

‘A lack of consumer confidence has rippled out across the market, but it’s reassuring to see that the confusion surrounding new diesel vehicles hasn’t hurt the sales of used diesel cars. This suggests that drivers who rely heavily on diesel – those driving frequent long distances, for example – are instead turning towards the second-hand market.

‘Dealers should consider this an opportunity to advise customers and help them identify the fuel type that’s right for their specific needs.’

On SuperUnleaded.com: Lovely jubbly! Only Fools and Horses Reliant Regal sells for £41,625