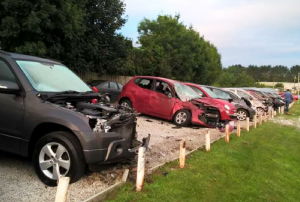 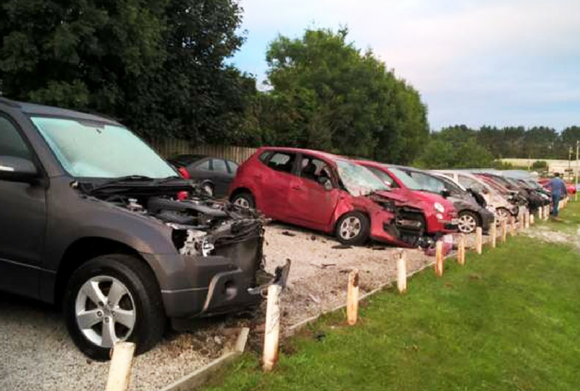 Woman dies after Vectra crashes into 22 cars on dealership forecourt

A WOMAN died after a Vauxhall Vectra she was travelling in careered off a main road and smashed into a row of 22 parked cars on a dealership forecourt last night.

The black saloon left the A390 near St Austell in Cornwall just after 9.45pm, police said.

The female passenger, who was in her 40s, died at the scene at Andrew Toms Cars, while the male driver was taken to hospital with ‘serious and significant’ injuries.

The road was closed for eight hours for investigations.

A dealership employee was quoted by the Mail Online as saying: ‘We don’t know much about it – we haven’t finished looking at the damage. It happened late last night.’

A Devon and Cornwall police spokesman said: ‘Officers from the roads policing team are appealing for witnesses.

‘They are particularly interested in anyone who witnessed the manner of driving of a black Vauxhall Vectra in the Hewas Water area at around 9.45pm.

‘Officers also want to speak to anyone who stopped at the scene of the collision to assist, leaving before the arrival of the police.’