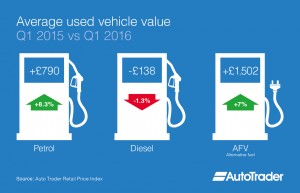 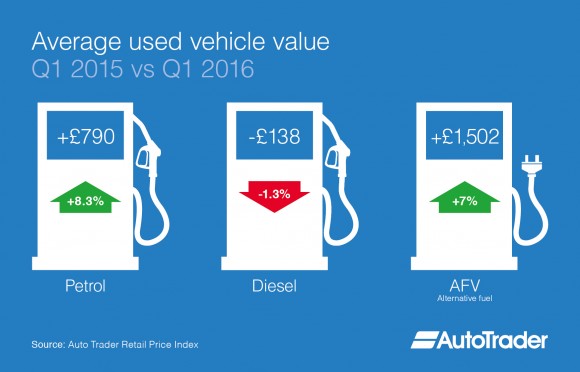 ALTERNATIVELY-fuelled vehicles (AFVs), including hybrid and pure electric cars, have increased in value by an average of £1,502 year-on-year to record a seven per cent increase over the same quarter in 2015.

According to the latest Auto Trader Retail Price Index, which tracks the market value of all cars advertised by retailers on Auto Trader, the gap over conventionally-powered wheels continues to grow, especially over diesel, where values for average used cars continue to decline year-on-year.

There are differences, however, in the different types of AFVs. Pure electric vehicles increased by £750 year-on-year, while average hybrid values increased by by £1,683.

In 2015, new AFV registrations continued a remarkable growth of over 40 per cent year-on-year to secure a new car market share of nearly three percent. Plug-in hybrids and electric cars appear to be the big drivers of this growth with plug-ins doubling in volume and pure electric new car registrations growing by 50 per cent.

With such strong growth in the new car market, it could indicate a knock-on effect on the used market with more consumers seeking out used AFVs. In March 2016, Auto Trader recorded a significant 27 per cent jump in the number of online advert views for AFVs compared to March 2015 and, while there is a growing number of them entering the second-hand market, it could indicate that supply is simply not keeping up with demand.

Karolina Edwards-Smajda, Auto Trader Retailer and Consumer Products director, said: ‘While we are seeing more used alternatively-fuelled vehicles turning up on dealers’ forecourts, the increase in ad views points to more consumers than ever looking to buy. Used AFV values are rising significantly with a four-digit increase as buyers are drawn in by low fuel running costs, current road tax rates that mean AFVs are often free to tax and, for some, exemption from the London Congestion Charge.

‘While both electric and hybrid cars are growing in value, it’s the hybrid of electric and conventional power that are proving particularly popular with used car buyers. This choice offers the greatest flexibility for a consumer.’

It isn’t just hybrid vehicles that have recorded an increase in values though, as average values for used petrol cars have also risen year-on-year by £790 (8.3 per cent). The loser in the second-hand market continues to be diesel, with these cars being worth less on average than a comparable petrol car. It’s a decline that began eight months ago and shows no signs of changing.

Edwards-Smajda, added: ‘Diesel vehicle used values continue to decline as supply increases and we are expecting to see equal market share between petrol and diesel come August 2016. With the number of used petrol vehicles on the UK’s forecourts declining, average used values are increasing albeit by a small margin.’