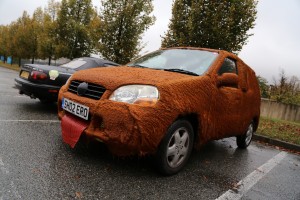 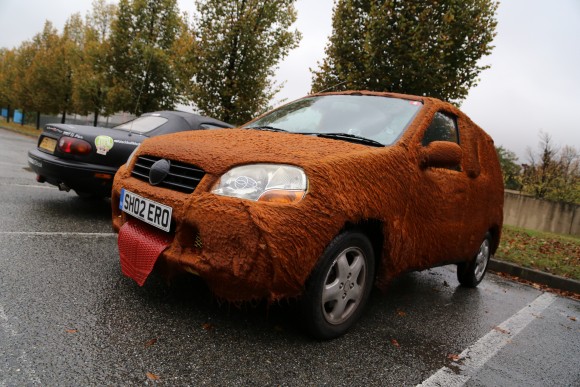 The auction at the annual celebration helped take the fundraising total for this year’s Bangers4BEN rally to more than £40,000 – the most ever raised.

Wiliam Blackshaw, boss of Blackshaws, was delighted with the amount the car – which was covered in fur – raised for the charity.

‘We’re very proud to have helped BEN out and I’m amazed at what the car went for,’ Blackshaw told us.

‘Big thanks to Car Dealer Magazine, Codeweavers, The AA and Suzuki for helping and for BEN for putting on an amazing ball. We met some great people at this year’s event. We are already planning next year’s event.’

Complete IT – which provides IT services for the motor trade – bought the car and are believed to be planning to use it for marketing purposes after driving it around!

Kelly Neal, events manager for BEN, said: ‘It was fantastic. It sold twice really. In the main auction it sold for £2,000 to Suzuki, but we got Complete IT up on stage who wanted it too and Suzuki who then submitted bids in a silent auction. Complete IT bid the £4,000 and won!

‘It’s amazing – it’s the most a Bangers car has ever sold for – and it was great to be able to raise so much money by selling it at our ball.

‘The Bangers4BEN rally got big applause on the night. It’s become a very important part of our fundraising now. We can’t wait until next year!’

If you’re interested in taking part in next year’s rally, you can register your interest now by emailing [email protected].

A full report on this year’s Bangers4BEN is in Issue 81 which is out now. You can download it for free on your iPad here or subscribe to Car Dealer Club here.