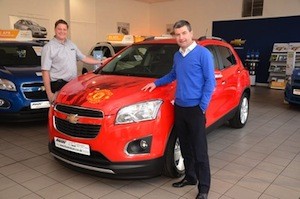 The dealership, based in West Sussex, secured the winning bid of the special edition Manchester United Trax on an eBay charity auction earlier this year.

The bonnet has been signed by the Premier League winning side of 2012 and 2013 and all proceeds from the auction will go to the Manchester United Foundation in order to support its Ability Counts football programme.

The programme offers disabled players the opportunity to play or coach with Manchester United and currently has between 150 and 160 players aged from eight to 40 years old.

The auction made an impressive £17,564.28 in total, after other items donated by Chevrolet including a Wayne Rooney match-worn shirt from his hat-trick match against Hannover in 2012, were snapped up by Manchester United fans across the world.

‘We really, really wanted this car – it’s something very special that celebrates Chevrolet’s association with Manchester United in a unique way, and it’s the perfect tool for us to draw attention to the new Trax in our dealership.’

He added: ‘I have no doubt that there will be plenty of football fans wanting to get their picture taken and they are more than welcome to visit the dealership to see the unique Trax.’