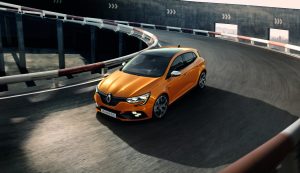 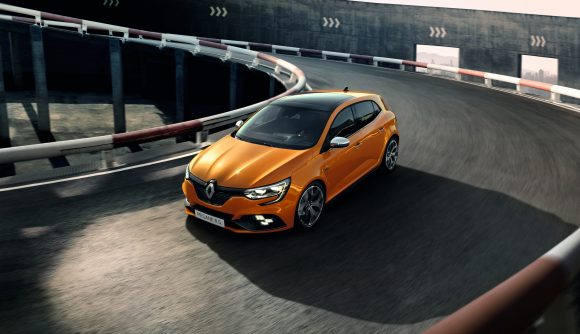 Power comes from a new 1.8-litre, turbocharged four-cylinder engine that produces 276bhp and 390Nm of torque.

While no specific performance figures have been released, Renault said the Megane RS will be able to complete the 0-60mph dash in less than six seconds and that it will be ‘firmly amongst the class’s front-runners in terms of peak torque’.

The French manufacturer has equipped the new Megane RS with its 4CONTROL four-wheel steering system, which is designed to provide greater agility and stability when cornering at high speeds.

And here’s a video of a man with a feather duster cleaning the new #MeganeRS #IAA17 pic.twitter.com/5loJEGqvYS

Customers will be able to choose between either a six-speed manual gearbox, or a six-speed dual-clutch automatic transmission. Two chassis options are also available – Sport and Cup – with the latter featuring a limited-slip differential as standard.

An even more powerful Trophy version of the Megane RS will be available by the end of 2018, which will produce 296bhp and 400Nm of torque.

Patrice Ratti, general manager of Renault Sport Cars, said: ‘Performance is the chief reason our customers cite for purchasing the Megane RS and the all-new Megane RS takes the styling and technologies even further to deliver truly exceptional driving enjoyment.

‘Our intention is to see the all-new Megane RS, with its chassis and 4CONTROL, remain the C-segment hot hatch benchmark.’

The new Megane RS will go on sale in the UK in spring 2018. No pricing information has been revealed, but it is likely it will cost less than £30,000.

MORE: Proceed concept grabs the limelight for Kia in Frankfurt

MORE: Frankfurt Motor Show 2017 – five to look out for

On SuperUnleaded.com: Armed robbers steal £75,000 in cash at Goodwood Revival