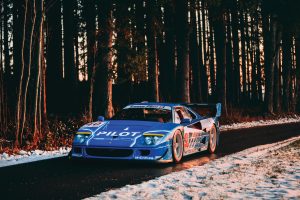 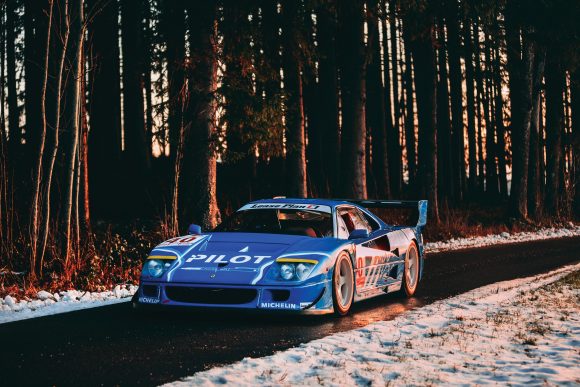 One of just 19 F40 LMs built for racing by Ferrari’s GT racing partner Michelotto, the stunning twin-turbocharged V8-powered car was one of the rarer vehicles under the hammer at the auction – part of the famous Paris Retromobile classic car event.

The auction house labelled it ‘without doubt the most significant F40 LM’ but that wasn’t enough for the car to reach its top estimate of 5.5m euros (£4.8m), with the hammer eventually falling at 4.8m euros (£4.2m).

In LM spec, the F40 is a truly wild car, with more than 700bhp – up from 471bhp in the road-going version – and a weight of just 1,050kg. Other modifications include a stiffer chassis, a gearbox built for the rigorous nature of endurance races such as the 24 Hours of Le Mans, and extensive aerodynamic improvements.

Among a raft of other impressive statistics for the F40 LM was a recorded speed of 229mph.

This particular F40 LM – arguably the most recognisable example – started life in 1987 as a pre-production prototype for the F40 road car. It was then sold into private hands in the early ’90s and sent to Michelotto for conversion to LM specification.

It didn’t take part in a race until 1995, at the peak of the BPR GT Series, and competed until the end of 1996, scoring a victory at Anderstorp in Sweden and podiums at Silverstone and Nogaro over the two seasons.

It then passed through collections for many years, before a full service last year. This means it is track-ready, and given there are now numerous historic racing series for cars such as this, its new owner could take part in events such as the Silverstone Classic if they wish to enjoy its performance first-hand.

Florent Moulin, the director of race car sales and restoration firm Art & Revs, believes that the market for cars such as the F40 LM and those that raced against it is going to soar: ‘GT racing cars from the fabulous 1994-1999 era are surely the most trendy today. The most valuable cars from this time period are the Porsche 911 GT1, McLaren F1 GTR and Ferrari F40 LM/GTE.

‘What is happening today with these cars from the ‘90s and ‘00s is the same thing that happened in the ’70s, when models from the ’50s and ’60s took off. It will not take long for the McLaren F1 GTR to sell for more than a Ferrari 250 GTO [an example of which sold in May 2018 for circa £54 million]. The Porsche and Ferrari will also rise significantly, but the McLaren will top the market.

‘In short, the new owner of this F40 LM has probably made the best car investment of their lives.’