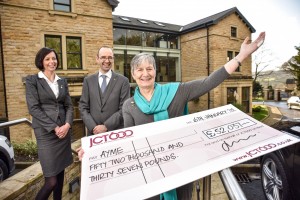 STAFF at Yorkshire-based family motor business JCT600 have raised £52,000 for the company’s chosen charity of 2014 – almost three times their target!

Over the last 12 months, JCT600’s 2,000-strong team, representing the company’s Bradford head office and its 47 dealerships, have taken part in a huge range of fund-raising activities to support the company’s nominated charity for the year, the Association of Young People with ME (AYME).

‘Originally, we had hoped to raise £18,000 so to have almost trebled that is amazing,’ said Nigel Shaw, finance director of JCT600. ‘It’s always inspiring to see the enthusiasm and ingenuity of colleagues as they come up with a host of stunts to support our chosen charity.

‘Last year was particularly impressive – as well as our annual Yorkshire Three Peaks walk, in true Tour spirit, we also hosted our first company-wide sponsored cycle ride in the summer and earlier in the year more than 300 colleagues and friends supported our quiz night.

‘As well as a huge number of silent auctions and cake/bake sales, special mentions must also go to one of our financial controllers at Mercedes-Benz in Sheffield who walked to Everest base camp to support the charity; a team from Volkswagen Bradford who drove an old banger over 2,500 miles to Monte Carlo this summer to raise funds; and colleagues from Porsche Centre Leeds who raised £1,500 from a sponsored skydive.’

Staff have once again been invited to put forward suggestions for charities which they would like to be the focus of the company’s fund-raising activities for the coming year and JCT600’s nominated charity for 2015 will be announced soon.

Mary-Jane Willows, chief executive of AYME, said: ‘It’s absolutely fantastic that the team at JCT600 has raised £52,000 for AYME and we’d like to thank every one of them for their support.’