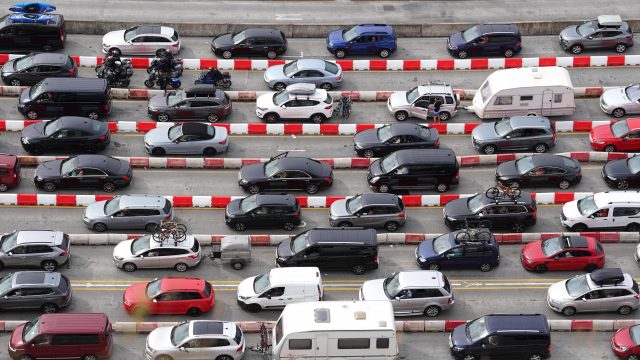 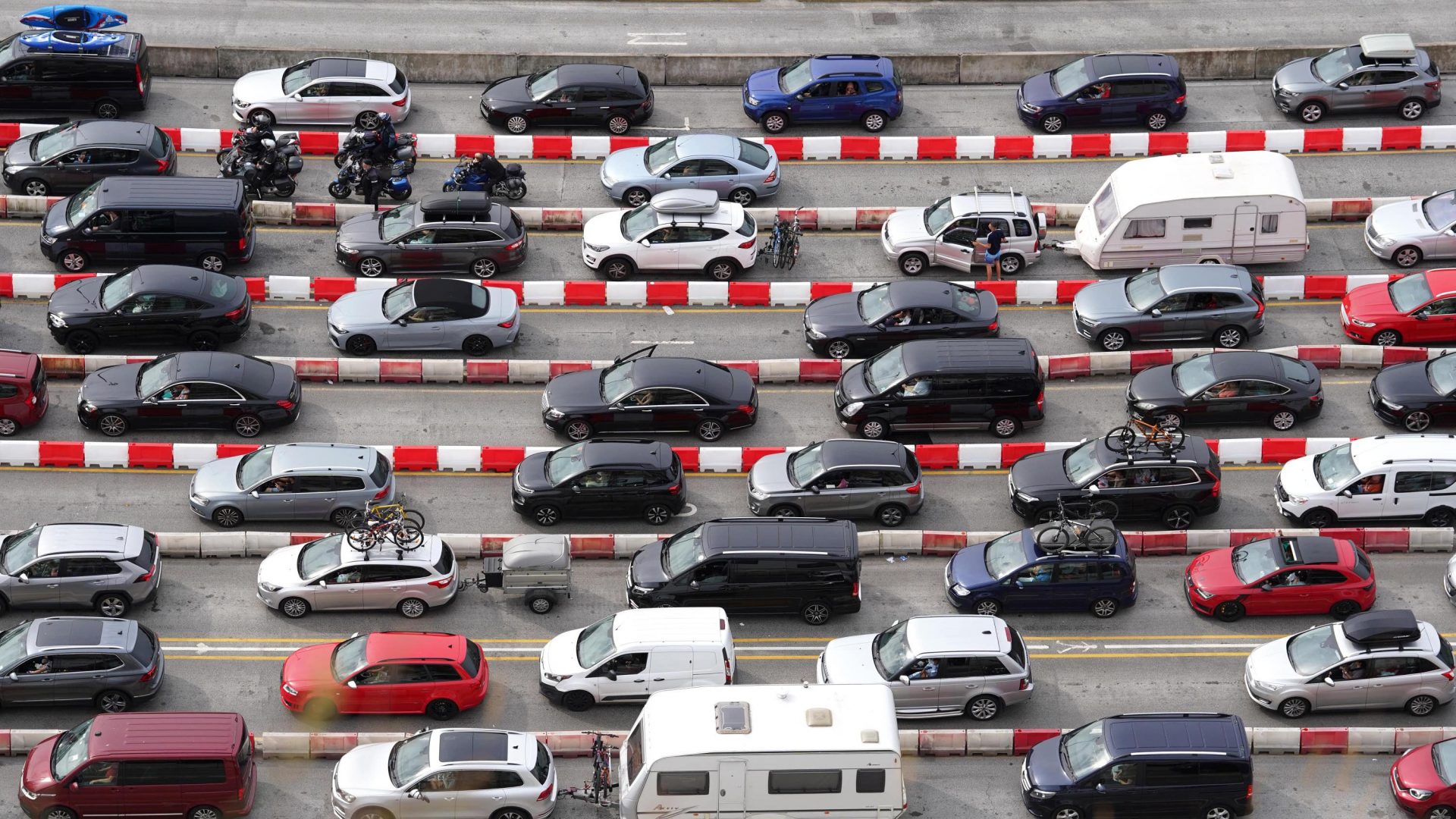 Travellers warned of worse delays on Saturday near Dover

Saturday is expected to be even busier for those hoping to begin their summer getaway after holidaymakers and lorry drivers faced gridlocked roads around Dover.

Bumper-to-bumper traffic and six-hour queues made its way towards the Port of Dover on Friday – one of the busiest periods for foreign travel from the UK as most schools in England and Wales break up for summer.

Foreign Secretary Liz Truss said the delays and queues are ‘unacceptable’, calling it an ‘entirely avoidable’ situation. But a French politician blamed Brexit for the chaos and more checks needed on those crossing.

Covid-19 infections are continuing to rise in England and have reached their highest level for three months, but the trend in the rest of the UK is uncertain, figures show.

Hospital numbers also appear to have stopped climbing, though it is too early to say if the latest wave of the virus is starting to peak, experts have cautioned.

A total of 3.8m people in private households in the UK are estimated to have had Covid-19 in the week to July 13/14, up from 3.5m the previous seven days, according to the Office for National Statistics (ONS).

UK’s record-breaking heatwave was most intense and widespread

The heatwave was the UK’s most intense and widespread – with the Met Office saying it was a climate milestone with ‘much more widespread and significant heat than previous noteworthy extreme heat events’.

The high temperatures saw the Met Office issue its lengthiest amber warning, lasting six days, followed by its first red warning for extreme heat as Brits were told to stay indoors as widespread travel disruption and wildfires broke out.

Russia and Ukraine signed separate agreements with Turkey and the United Nations clearing the way for exporting millions of tons of desperately needed Ukrainian grain as well as Russian grain and fertiliser.

The moves end a wartime stand-off that had threatened food security around the globe.

UK support for Ukraine will ‘not waver’, Johnson tells Zelensky

Boris Johnson spoke to Volodymyr Zelensky yesterday, telling the Ukrainian president that UK support will ‘not waver’ regardless of who becomes the next prime minister.

The Prime Minister also welcomed news of a much-anticipated deal to get grain out of Ukraine, amid hopes that the agreement can avoid a global food crisis.

In a call between the two leaders, Johnson ‘stressed the UK’s ongoing determination to support the Ukrainian people and said that resolve will not waver, no matter who becomes the next UK prime minister’.

Transport for London (TfL) says it is reviewing a draft proposal from the government for a long-term funding settlement.

TfL has been operating on a series of emergency short-term funding deals since falling into financial trouble during the pandemic.

Andy Byford, London’s Transport Commissioner, said the long-term funding – if agreed – would provide much-needed certainty for those in the nation’s capital.

The Red Arrows jets and Typhoon warplanes have been grounded after concerns about a safety issue with the ejector seats.

They were grounded for all but essential flying as checks were carried out into the ‘technical issue’, which it was feared ‘may affect the safe operation’ of the ejector seats, the RAF said.

The Red Arrows was forced to cancel a display at the Farnborough Air Show, but was given the all-clear late on Friday. Typhoon flights are still restricted.

Rishi Sunak has said that he would put the UK on a ‘crisis footing’ from his first day as prime minister, as he and Liz Truss bid to woo the Tory grassroots as the leadership contest continues.

In interviews with two major newspapers, both Sunak and Truss reveal proposals designed to firm up their case to be the next Conservative leader.

The former chancellor told The Times that the UK needs to be on a ‘crisis footing’ to deal with inflation. Meanwhile, Truss robustly defended her economic plans in an interview with the Telegraph.

Three people were killed in a shooting at a state park in eastern Iowa on Friday and the suspected gunman is also dead, police said.

Officers responded to reports of the shooting at the Maquoketa Caves State Park Campground before 6.30am, Mike Krapfl, special agent in charge of the Iowa Division of Criminal Investigation, said in a statement.

Mr Krapfl said officers responding to reports of shooting found three people dead at the scene. They later found the body of 23-year-old Anthony Sherwin who had died from a self-inflicted gunshot wound.

Co-op to cut around 400 jobs due to inflation hit

The Co-op Group is to axe around 400 jobs as the retail and funeral firm blamed tough trading conditions amid ‘rising inflation’.

The company said none of its customer-facing roles in food stores or funeral homes will be impacted by the shake-up.

It is understood that the cuts will predominantly affect workers at its Manchester headquarters.

Shares in London’s top index ended the week with a day of little change, but still managed to hit its highest Friday close for six weeks.

Twitter reported a quarterly loss yesterday as revenue slipped despite its number of users climbing.

The social media company’s latest quarterly earnings figures offered a glimpse into how the social media business has performed during a months-long negotiation with billionaire and Tesla chief executive Elon Musk over whether he will take over the company.

The company lost £226m in the April-June period after revenue slipped one per cent to nearly £1bn, reflecting advertising industry headwinds, as well as ‘uncertainty’ over Musk’s acquisition bid.

Today, thick cloud and outbreaks of heavy rain will spread into northern and western areas, and it will turn breezy. It will stay dry and warm in the south-east, with spells of sunshine, says the BBC.

A cloudy night across the UK with spells of rain for many, these heavy and thundery to the north. South-eastern areas will remain drier, with variable cloud and clear spells.

Tomorrow will be widely unsettled and breezy. There will be sharp showers for many, these thundery to the north and merging into longer spells of rain at times. It will be drier and very warm in the south-east.