New car sales down -97 per cent in April

April new car registrations look likely to be down 97 per cent – with just 4,000 new cars purchased, according to preliminary figures from the SMMT.

The SMMT is forecasting that around 1.68m new cars will be registered during the whole of 2020, which would represent a 27 per cent decline on last year. The 4,000 new cars registered in April compares to 161,000 in the same month in 2019. The full figures will be released at 9am this morning and can be seen here.

Download virus app to save lives and end lockdown

Trials are beginning on a new coronavirus contact-tracing app which ministers say will save lives and help lift Britain out of lockdown.

NHS and council staff on the Isle of Wight were being urged to download the Covid-19 smartphone app today with the rest of the island’s population invited to follow on Thursday.

If the tests are successful it could be rolled out across the country within weeks as ministers seek to shape a strategy to allow some economic activity to resume, with the long-awaited ‘roadmap’ for easing lockdown being published on Sunday.

Social distancing could be in place at work for a year

The Sun believes some social distancing measures at work will be required for between six months to a year, with growing fears among medical advisers that the coronavirus is seasonal.

An industry source told the newspaper: ‘If it survives the winter, these measures will have to be in place longer.’

Unions have attacked government plans to ensure social distancing in the workplace, saying there was no binding requirement on employers to ensure safety. Details on guidelines likely to be issued to car dealers can be found here.

Tens of thousands of small businesses applied for the government’s new bounce-back loans on the first day, already surpassing the coronavirus loan initiative launched in March.

Barclays said it had received around 200 applications in the first minute after it launched the scheme on Monday morning and all were approved just minutes later. 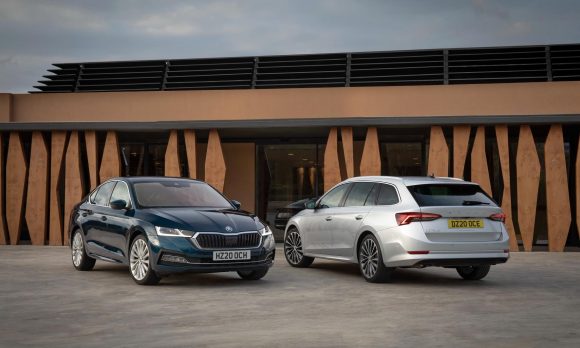 Skoda has revealed its fourth-generation Octavia will cost from £22,390 when it goes on sale this summer.

The popular family car’s latest generation will be launched with a business buyer-focused trim level and two high-specification launch editions before being joined by further trim levels and engine options later.

Airline stocks took some of the biggest hits, with easyJet falling 7.2%, and British Airways owner IAG losing 5.2% of its value. Rolls-Royce, which makes plane engines, also dropped heavily, by 6.9%.

Shares in Pendragon slipped after it said its discussions over a merger with Lookers had ‘ceased’.

The dealer group told the market yesterday it held talks with rival Lookers over a potential merger, but failed to secure a deal. Pendragon said the talks collapsed despite believing that ‘such an exploration would have proved beneficial’.

Shares in Pendragon moved down 3.8% to 7.9p in early trading. Full story here.

More than two million claims for welfare support have been submitted during the pandemic.

Work and pensions secretary Therese Coffey said more than 1.8m claims have been made for Universal Credit, more than 250,000 for Jobseeker’s Allowance and 20,000 claims for Employment Support Allowance.

She said this is six times the volume typically experienced, with the rate for UC claims appearing to have ‘stabilised’ at between 20,000 and 25,000 per day.

Kia has updated its popular Sportage range, bolstering the SUV’s appeal with more technology and equipment.

The largest change to be announced is the introduction of a new specification – ‘3’. It adds more equipment – including a heated steering wheel and panoramic sunroof – and will start from £26,445.

O2 in talks to merge with Virgin Media

Mobile operator O2 is in talks to merge with Virgin Media in a move which would create one of the UK’s largest telecoms and media firms.

Telefonica, O2’s Spanish owner, confirmed it is in discussions with Virgin-owner Liberty Global over a deal between the two firms.

It stressed that it is currently in the ‘negotiation phase’, and it is not guaranteed that the two parties will agree a deal. A tie-up would create a major rival for BT, which owns EE, the UK’s second largest mobile network.

The government has announced it is investing £12m into improving the M56 motorway between Manchester and Wales.

Over the next 12 months, the 28-mile stretch of motorway will see central reservation replacements, revitalisation of a viaduct near Helsby, and resurfacing of the road near Ellesmere Port.

Highways England says it will mean stretches of the motorway will have reduced speed limits and lane closures ‘for the safety of drivers and road workers’.

Guide: Why home deliveries could become a part of every car dealers’ future plans

How do local lockdowns affect customer behaviour and will new government restrictions put off car buyers?

Sept 27 round-up: Brexit deal must be made; Drive through flu jab; Production for Polestar Precept