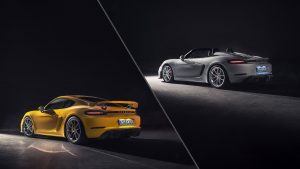 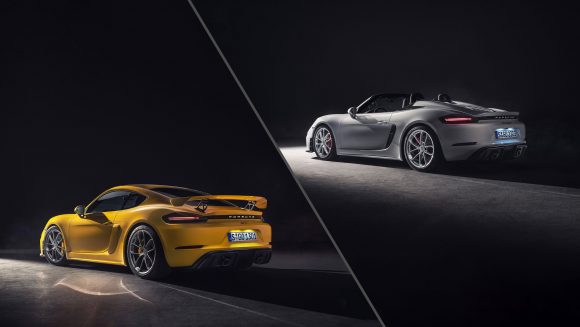 Both cars use the same naturally aspirated six-cylinder engine and send power to the road through a six-speed manual gearbox.

The new 4.0-litre flat-six unit produces 414bhp – 44bhp and 35bhp more than the previous-generation Spyder and GT4 respectively – as well as 420Nm of torque.

It allows both cars to crack the 0-60mph sprint in 4.2 seconds. Top speed-wise, the Spyder will top out at 187mph, with the GT4 eclipsing it slightly at 188mph.

Despite the performance, Porsche has worked hard to increase the efficiency of the engine. That’s why a particulate filter has been fitted to reduce NOx emissions, while a new adaptive cylinder control system lets the engine shut down two cylinders under light throttle, improving consumption.

Porsche says both the 718 Cayman GT4 and Spyder will return 26mpg under the old NEDC test cycle – which would put them at around 22mpg under the latest WLTP tests. CO2 emissions are set at 249g/km.

The GT4 has been dealt a wealth of aerodynamic features, which is why Porsche says it’ll generate up to 50 per cent more downforce than the car it replaces. It has a functional rear diffuser, as well as a fixed rear wing that is now 20 per cent more efficient than the one on the older car.

The Spyder benefits from a new rear spoiler that automatically rises at 74mph. In keeping with the car it replaces, it still uses a manually operated hood.