Luxury used car prices have grown by up to 10 per cent during the past year, showing they are pandemic-proof.

That’s according to new data from used car marketplace Motorway.co.uk, which revealed today (Sep 2) how the average prices of some of the most popular luxury vehicles had shot up.

Other prestige brands such as Audi and BMW also fared well post-lockdown, with average prices slightly higher this year than in 2019.

The only top-end brand that saw average values drop slightly was Mercedes-Benz, which registered a 1.4 per cent dip compared with 12 months earlier.

Across the mid and lower-end brands, Smart and Citroen saw used car prices rise by more than six per cent in 2020 against 2019. However, Toyota’s second-hand prices fell by 2.9 per cent.

Motorway.co.uk director Alex Buttle said: ‘The prestige end of the used car market has shown remarkable resilience during lockdown, and since restrictions were eased any expected drop off in values just hasn’t materialised.

‘This has led to higher-than-expected offers for sellers with quality used vehicles on our website.

‘Demand from dealers has been high for top-end brands, with car owners attracted to the second-hand market where two-to-three-year old cars can be picked up at affordable prices. 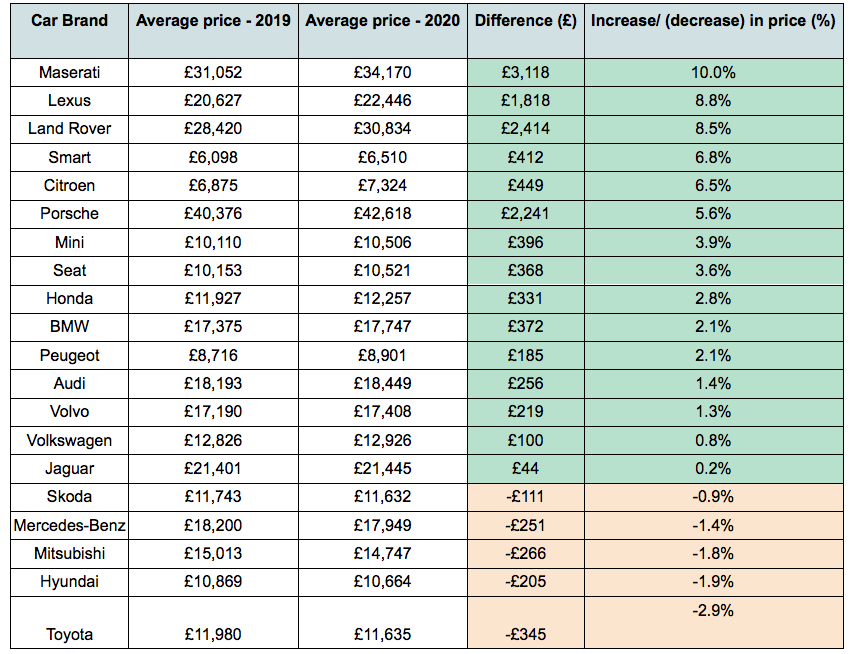 ‘For example, Land Rover drivers looking to upgrade their cars can find three-year-old, fifth-generation Discoveries for just over £30k, as opposed to paying upwards of £60k new.’

‘People still want a nice car, but with the short-to-medium-term economic outlook remaining uncertain, many owners are understandably reluctant to commit to buying expensive new cars on finance at the moment.

‘There is a real appetite for quality used cars, and this is born out in our data. This increased demand is squeezing supply levels, particularly on the budget and premium end, but also at the mid-range too.

‘It’s all combining to create upward pressure on prices across the board. This trend has continued into July and August, and will likely remain into the rest of the year as people return to work after the summer holidays.’

See other stories about used cars in our dedicated section