Cazoo is said to be on the hunt for 16 more sites to expand the brand’s retail presence after the purchase of Imperial Car Supermarkets last month.

The former online only used car dealer – which has raised more than £200m – snapped up Imperial Car Supermarkets in July and is cherry picking which sites to rebrand.

Car Dealer reported at the weekend that Cazoo branding had gone up on a site formerly occupied as Swansway Honda in Manchester and our spies also spotted another spring up on the busy North Circular road in London.

Now, an insider has said the Cazoo rebranding of Imperial sites is due to be completed by September 10 and that the business is on the look out for 16 more locations to buy before the middle of 2021.

‘We’re in the transition phase at the moment,’ said the insider close to the project.

‘As of September 10 sites are due to be rebranded Cazoo but some may keep Imperial branding until October or November.

‘Cazoo wants to buy 16 more sites across the UK and is actively looking for them.’

The insider said Cazoo only wanted the Imperial sites with workshops attached – after Cazoo founder Alex Chesterman baulked at the cost he was being charged for preparing cars – as well as the car supermarket’s stock.

It is thought the other Imperial sites – including Swanwick and Portsmouth – could be spun off by two former Imperial directors who are in negotiations with Cazoo to buy the properties back after agreeing to exit the business. 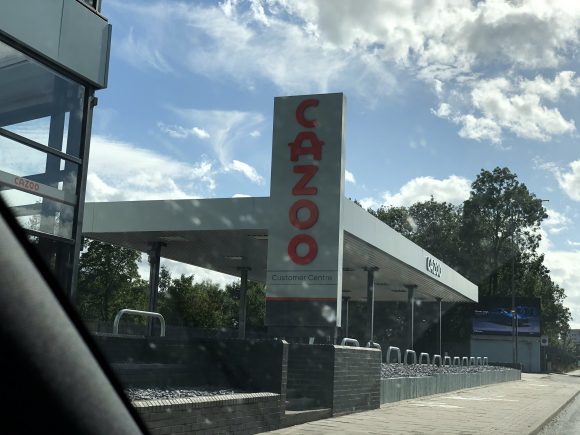 The site near Wembley is branded as a ‘Customer Centre’.

Our insider said Cazoo has also placed an order for 150 new transporters – increasing its fleet from the current 40 it uses to deliver cars to customer homes.

Imperial sales staff are openly talking about the Cazoo plans to customers who visit their showrooms and are explaining how the new venture will work.

They are telling customers that they can order a car online and then 72 hours later visit a Cazoo ‘customer centre’ to take it away for a seven-day test drive.

This is a distinct change to the home delivery model and suggests many customers did actually want to visit a showroom to see a used car all along.

Cazoo has been accused of a ‘huge u-turn’ as it moves away from selling cars purely online to set up physical sites.

Serial automotive investor Bruce Beaton said: ‘I can’t believe it was in their plan to invest in bricks – so basically a failure.’

This is great news for the automotive retail sector. The player that said dealerships are dead and online is the way forward has put the white flag up on a nonsense strategy and joined the rest of us in bricks and clicks. You can’t have two different valuation multiples now.

Car Dealer was leaked the Cazoo investment pack earlier this year that was sent out prior to launch and nowhere within it is a plan to eventually buy physical sites.

Investors were told that the online sales solution was the future and that Cazoo planned to ‘Amazon the UK used car market’.

The news Chesterman is on the hunt for yet more retail sites shows a further departure from this online only model, especially as its investment packs claims ‘traditional dealers are not enjoyed by consumers’.

‘They are burdened with high overheads passed on to consumers… and don’t have expertise or scale to provide a quality guarantee.’

While the Cazoo sites may be branded as ‘customer centres’ and not dealerships, so far they look and feel very similar.

Cazoo has been contacted for comment but has not yet responded.