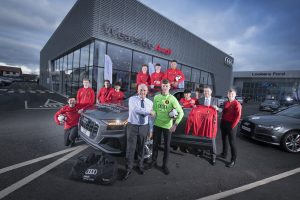 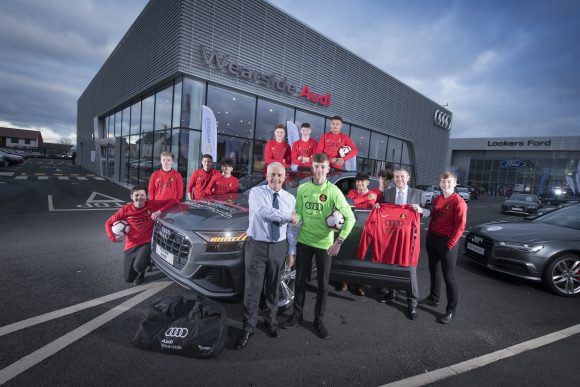 WEARSIDE Audi has given a football team a kick-start by providing their new football kits as well as contributing to extra support for their studies.

The centre, part of the Lookers group, has provided new kits for Southmoor Academy Sixth Form as they continue their season in the Durham County School League alongside the Durham School County League Cup tournament.

The team gained momentum recently after starting a new football training partnership with Durham University, whose professional coaches are helping to train the young footballing hopefuls.

The partnership will also see Wearside Audi establish even greater ties with the school by holding joint fundraising events to pay for extra-curricular development opportunities and resources for its students.

Richard Hyde, head of business at Wearside Audi, said: ‘We are excited to be supporting Southmoor Academy Sixth Form football team as part of our ongoing support for grass-roots sport within the communities we serve.

‘But perhaps more importantly, we are proud to be raising money to help provide additional support for its young students during what can be a very challenging time in their lives.’

Chris Marr, assistant director of Southmoor Academy Sixth Form, said: ‘We would like to say a massive thank-you to Wearside Audi for their support for our sporting youngsters, who I’m sure will be feeling immensely proud to be running out in their new kits.

‘It’s also fantastic that they have agreed to help us provide extra support for our students. I think we are all becoming increasingly aware of the challenges that our young people can face as sixth form students, so any additional resources to help them achieve their goals is most welcome.’