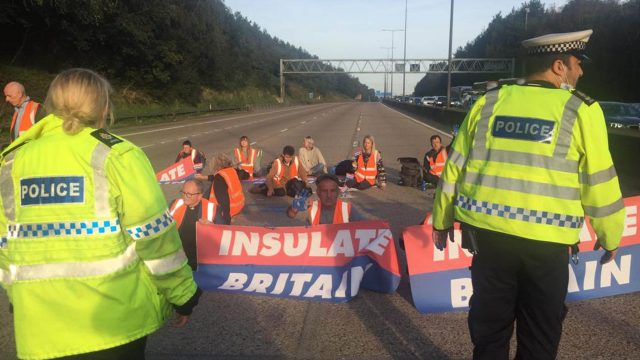 Taxpayers will pay towards the operating costs of a major US-owned fertiliser manufacturer to ensure the supply of CO2 for the food sector continues amid the ongoing energy crisis.

It has been confirmed that a deal brokered by business secretary Kwasi Kwarteng will see the UK government provide ‘limited financial support’ towards CF Fertilisers’ running costs in order to prevent a food supply shortage at Britain’s supermarkets.

The agreement will be in place for three weeks while the ‘CO2 market adapts’ to the surge in global gas prices, according to the Department for Business, Energy and Industrial Strategy (Beis). Kwarteng said the decision would avert ‘disruption’ in the ‘many critical industries that rely on a stable supply’ of carbon dioxide.

Joe Biden downplayed prospects of brokering a post-Brexit trade deal with Boris Johnson, as ministers resorted to considering downgrading their efforts to join an existing pact.

Meeting the prime minister in the White House, the US president issued a fresh warning for the UK not to damage the peace process in Northern Ireland over the EU departure.

Biden did not counter the assertion from his predecessor Barack Obama’s that Britain would be at the ‘back of the queue’ for a post-Brexit free trade agreement.

The home secretary has vowed to crack down on ‘guerilla’ activism after an environmental group shut down the M25 five times in just over a week.

Writing for the Daily Mail alongside transport secretary Grant Shapps, Priti Patel said the Home Office is working with National Highways to take legal action against the Insulate Britain group in a bid to ‘ensure they cannot keep disrupting and endangering people’s lives’.

Their comments come after Surrey Police on Tuesday arrested 38 activists from the group who targeted junctions 9 and 10 of Britain’s busiest motorway at 7.57am.

China and US unveil big steps to fight climate change

The two biggest economies and largest carbon polluters in the world have announced separate financial attacks on climate change.

Chinese president Xi Jinping said his country will no longer fund coal-fired power plants abroad, surprising the world on climate for the second straight year at the UN General Assembly.

That came hours after US president Joe Biden announced a doubling of financial aid to poorer nations so they could switch to cleaner energy and cope with global warming’s worsening impacts. This could provide some momentum going into major climate talks in Glasgow, Scotland, in less than six weeks, experts said.

Around 15 million households across Britain will be hit with a £178 annual hike on their energy bills as the price cap is set to soar to another record high from April, analysts have said.

Experts at research agency Cornwall Insight expect that the price cap will be hiked to £1,455 for the typical household.

It comes after the cost of gas on wholesale markets rocketed at unprecedented rates, up 70 per cent since August and 250 per cent since the beginning of the year, according to trade body Oil & Gas UK. The price cap is reviewed by regulator Ofgem every six months based on a set of rules.

Pret a Manger has said it will open more than 200 UK shops over the next two years, after securing a further £100m cash injection.

The sandwich and coffee chain was battered by the pandemic but said it has seen its city centre sites recover further in recent weeks as more workers have returned to the office. It said its regional shops were now at their strongest ever levels while its London City sites had rebounded to 72 per cent of weekly pre-pandemic sales.

The company revealed that it plunged to pre-tax operating loss of £256.5m for 2020, in new filings on Companies House. Pret saw its revenues fall by 58 per cent to £299m for the year, as it was forced to shut the shops for months and saw footfall significantly depressed by Covid-19.

A new online museum dedicated to the history of the mobile phone is to launch in November containing more than 2,000 unique handsets from 200 different manufacturers.

The Mobile Phone Museum, which will chart the evolution of the mobile phone from 1984 to the present day, has also been backed by mobile operator Vodafone through a five-year sponsorship deal.

The museum has been created by mobile phone expert Ben Wood, who is also chief analyst at technology research and analyst firm CCS Insight, and fellow mobile industry veteran Matt Chatterley, with the pair aiming to create pop-up physical exhibitions in the future to bring the handset collection to as many people as possible.

A mixed picture for the UK today, reports BBC Weather, as northern Scotland will be battered by blustery rain which will move into southern Scotland and Northern Ireland later. Meanwhile, England and Wales will remain sunny and dry.

Tonight, Scotland will hang onto rain while other parts of the country will be dry with variable cloud.