Home > News > New car sales fall by 4.4 per cent as September 2020 sees the weakest-ever new plate for the month, according to SMMT figures

New car sales fall by 4.4 per cent as September 2020 sees the weakest-ever new plate for the month, according to SMMT figures

New car sales dropped by 4.4 per cent in September, figures released by the SMMT at 9am today (Oct 5) revealed.

The figures were predicted to be down by up to four per cent, as reported by Car Dealer.

The new car sector had 328,041 registrations in the month – which the SMMT said was the weakest September since the introduction of the dual number plate system in 1999 and some 15.8 per cent lower than the 10-year average of around 390,000 units for the month.

Mike Hawes, SMMT chief executive,  said: ‘During a torrid year, the automotive industry has demonstrated incredible resilience, but this is not a recovery.

‘Despite the boost of a new registration plate, new model introductions and attractive offers, this is still the poorest September since the two-plate system was introduced in 1999.

‘Unless the pandemic is controlled and economy-wide consumer and business confidence rebuilt, the short-term future looks very challenging indeed.’ 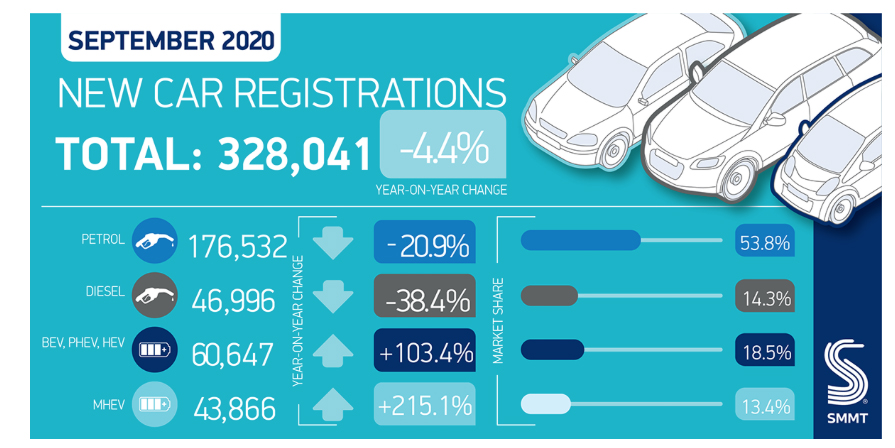 Private registrations declined by 1.1 per cent over the month. Business demand was also muted, with some 10,000 fewer cars joining larger fleets – a 5.8 per cent drop.

The SMMT said, however, that it took heart from the fact that battery-electric and plug-in hybrid uptake in September 2020 rose ‘substantially’, accounting for more than one in 10 registrations as new models continued to widen consumer choice.

It said that demand for battery-electric vehicles shot up by 184.3 per cent against September 2019.

However, the SMMT warned that the market still faced continued pressure, with looming challenges such as Brexit uncertainty and the threat of tariffs.

It added that the shift towards zero-emission-capable vehicles was demanding massive investment.

A stalling of fleet renewal across all technologies was also hampering efforts to meet climate change and air quality targets now. 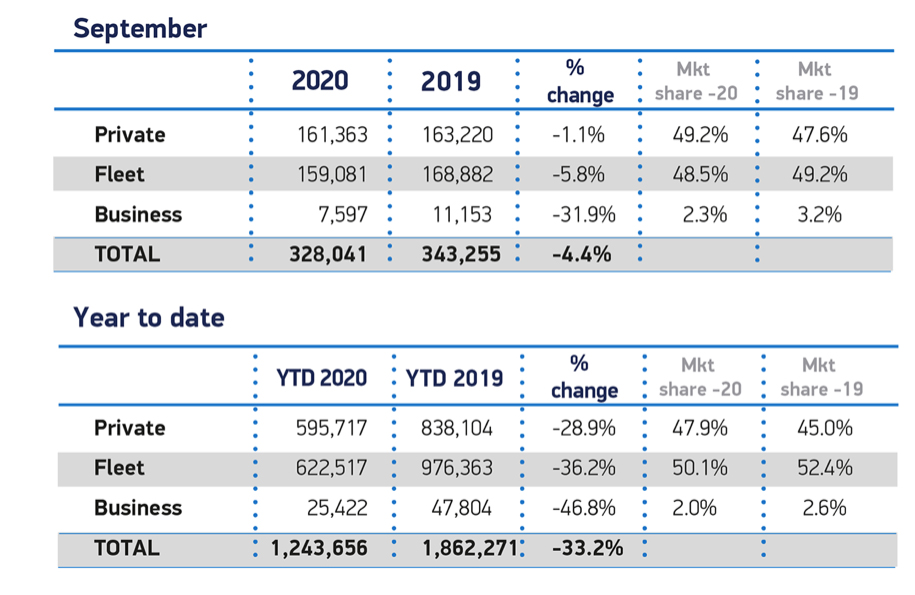 What’s more, consumer and business confidence was being threatened by the forthcoming end of the furlough scheme, plus an expected rise in unemployment and continuing restrictions on society because of the pandemic.

The SMMT said there had been 615,000 registrations lost during the first three-quarters of the year, with little realistic prospect of clawing them back.

ASE Global chairman Mike Jones analysed the figures with James Batchelor on Car Dealer Live as the data was released. You can watch the interview by clicking on the main image.

New car registration figures for August down 5.8 per cent