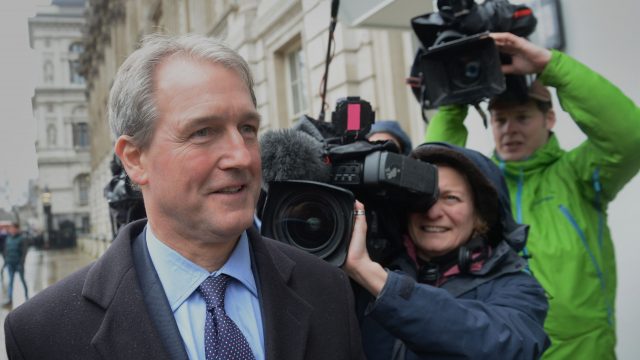 The Conservative former premier said the conduct was ‘shameful’ and had trashed the reputation of Parliament.

And he suggested the Johnson administration was ‘politically corrupt’ over its treatment of the House of Commons.

The elderly and vulnerable have been urged to get their Covid-19 booster jabs as part of a ‘national mission’ to help avoid a return to coronavirus restrictions over Christmas.

So far almost 10 million people in the UK have received a top-up jab, but around 30 per cent of over-80s and 40 per cent of over-50s in England are yet to receive a booster shot of vaccine, the Department of Health and Social Care said.

Three million more people in England are being invited to have their coronavirus booster jabs next week.

Eight people died after the crowd at a Texas music festival surged toward the stage during a performance by rapper Travis Scott, squeezing fans so tightly together that they could not breathe or move their arms.

The pandemonium unfolded on Friday at Astroworld, a two-day event in Houston, Texas, with an estimated 50,000 people in attendance.

As a timer clicked down to the start of the performance, the crowd pushed forward.

The musician went on to perform with breakaway group UB40 featuring Ali Campbell and Astro.

A statement on the band’s official Twitter said: ‘We are absolutely devastated and completely heartbroken to have to tell you that our beloved Astro has today passed away after a very short illness.’

Police arrested 21 people during the climate rally in Glasgow, with demonstrators kettled and protesters forcibly removed from a city centre bridge.

Tens of thousands of protesters marched through the streets of Glasgow to demand action to tackle the climate emergency as the city hosts the Cop26 summit.

Crowds walked from Kelvingrove Park to Glasgow Green, with organisers estimating that more than 100,000 people took part in the march.

Former defence minister Tobias Ellwood says Boris Johnson risks ending up as ‘just another former occupant of No 10’ if he takes Parliament for granted as the storm continues from the Owen Paterson row.

Mr Ellwood wrote in The Sun: ‘A PM who takes Parliament for granted will achieve none of these things and simply end up, not as a big beast, but as just another former occupant of No 10.’

Toyota has revealed the latest generation of its city car – the Aygo X – which boasts a striking SUV-inspired design and claims impressive levels of technology.

Though the previous Aygo was built on the same platform – and rolled off the same production line – as the Citroen C1 and Peugeot 108, Toyota is now going alone with it.

Now called the Aygo X – the ‘X’ pronounced ‘cross’ – it shows Toyota’s commitment to more affordable petrol city cars at a time when many are only investing in EVs.

Cloud and wind to sweep the country

Today, it will be another cloudy and windy day for much of the UK. There will be a few spots of light rain in western areas and Orkney, although some sunny spells will develop in the east, according to the BBC.

Tonight, it will be cloudy and dry for most, with just occasional light rain in places. Eastern Scotland and northern England will see clear breaks and variable cloud. Winds will ease for all.

Tomorrow, southern England and Wales will be mostly cloudy and dry. Northern Ireland will see spells of rain in the morning, these moving into Scotland and northern England later. Breezy in the north.