Cazoo has announced a new deal to become the main sponsor of the World Snooker Championship, less than a week after admitting it may never become a profitable business.

Last week, Car Dealer reported that the online retailer warned investors that it has ‘a history of losses’ and ‘may never achieve profitability’.

However, if anyone thought that bleak outlook would lead to a change in strategy, they now appear to have been proved wrong.

Despite losing £180m last year, the firm has now agreed yet another sports sponsorship deal, this time to partner with snooker’s showpiece event.

The new ‘multi-year agreement’ will see the tournament rebranded as the ‘Cazoo World Snooker Championship’ with the retailer enjoying prominent branding on the main set, the players’ waistcoats and on interview and media conference backdrops.

We are delighted to announce Cazoo, Europe’s leading online car retailer, as the new title sponsor of our biggest tournament and one of the most prestigious events on the sporting calendar, the World Snooker Championship.

Cazoo already has involvement in snooker through its sponsorships of the British Open, the Masters, the UK Championship and the Champion of Champions

It replaces bookmaker Betfred, which has held the rights since 2015. The event, held at Sheffield’s Crucible Theatre, was famously sponsored by Embassy Cigarettes between 1976 and 2005.

What else does Cazoo Sponsor?

Alex Chesterman OBE, founder & CEO of Cazoo said: ‘We are excited to be expanding our partnership with World Snooker Tour (WST) and Matchroom to include the World Snooker Championship, the third and final triple crown event.

‘This deal will help to further grow our audience as we continue to build Cazoo and deliver the best car buying and selling experience across the UK and Europe.’

The latest World Championship concluded last week (May 2) with Ronnie O’Sullivan beating Judd Trump 18-13 in the final to win his seventh title. 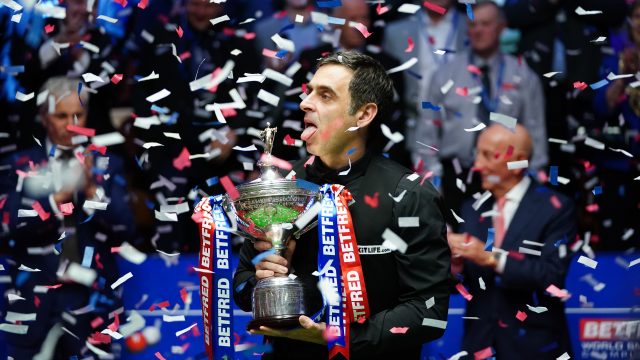 Steve Dawson, chairman of WST said: ‘This is a fantastic announcement for our sport as we welcome Cazoo as the title sponsor of our greatest tournament, the World Snooker Championship, for the first time.

‘This is an event which generates a massive amount of interest and excitement on a global scale. A worldwide audience of 500 million watches the action from the Crucible on television, while in the UK it is among the best loved fortnights of the sporting year.

‘We are now working with Cazoo on a wide range of our biggest tournaments throughout the season and we look forward to continuing to build this successful partnership for years to come.’